“No opinion that cannot stand discussion or criticism is worth holding.” –James E. Talmage

While your qualifications certify your intelligence, another aspect helps prove it: group discussions. Whether you’re applying for a job, pondering solutions, or even simply making your presence felt, being good at group discussions is key.

This doesn’t mean assembling in a circle in an air-conditioned room, trying to outsmart the person sitting next to you. Sitting on the dining table with your family, and arguing the merit of the political party leader you heard on the television earlier that day takes as much skill as pitching your idea to a band of people. Group discussions are meant to use your individual creative thinking abilities to arrive at a unanimous solution.

GDs can be topic-based or case-based. The former category can further be divided into three- factual, controversial, and abstract.

Factual topics relate to your day-to-day life and show your sensitivity towards your environment. This tests your awareness of your surroundings and could be vague or specific. Cricket and India is an example of generic factual topics.

Controversial, on the other hand, is your banter on feminism. As the name suggests, it is argumentative and it isn’t uncommon to hear people screaming to get their opinion accepted. But here’s the thing: being heard does not make your option the best. If instead of throwing chairs, solutions were exchanged, the state of India’s Parliament would be much better, and that is a perfect example of how not to behave in a group discussion.

There is no correct or incorrect answer in an abstract discussion, which counters questions such as the existence of God. Adding an understandable and universally acceptable angle to an otherwise intangible equation is your road to success in this case.

J.P. Guilford, the renowned psychologist, categorized thinking as divergent and convergent. The first believes in creating choices, while the latter helps choose from them. Group discussions test both these skills- you first come up with different solutions, and critically analyze them.

One method to employ divergent thinking in a firm is to initiate simulation, as is done in case-based group discussions. The organization is given a problem as a group, which they need to counter through discussion to arrive at the best possible solution. The way to work in such instances is to separate the judgment from the ideating: ponder solutions without worrying about their plausibility, which can be tested later. 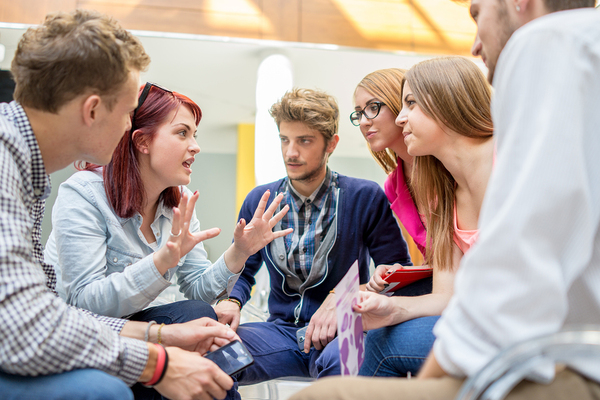 The way to succeed in a GD is not to be the man with quantity, but the man with quality. Cliché as it may sound, it is better to come up with two valuable inputs rather than ten meaningless ones. Quoting Lois Wyse, “If you can’t add to the discussion, don’t subtract by talking.” It’s okay if you can’t fathom inputs; don’t degrade the quality of the discussion by talking for the sake of it.

That being said, if you get the chance to start a group discussion, take it. A beginning speech sets the ground for the remaining candidates and provides a base for discussion. Further, it is more likely to revolve around your ideas, as everyone wraps their minds around your opinion. It is then your responsibility to take the discussion on the right path which facilitates debate. Stating facts or quotes creates an impactful beginning, but you could also take the emotional route and try appealing to pathos.

Your discussion is like a story: it has a beginning, a middle, and an end. You begin with providing a background, wherein your facts and stats are laid out. Eventually, the plot builds up to incorporate various opinions and ideas, and finally, there is a climax or your conclusion. A discussion must have a conclusion for it to be fruitful, which is supported by the majority of the people. To conclude a GD, it is a good idea to summarize the entire discussion and state what the consensus is. Each person should walk out of the room with an enhanced knowledge of the topic.

The most effort, however, goes into the middle, after you’ve sown the seed of your idea, and its development depends on the inputs it gets. You must be articulate and brief while stating your opinion, but at the same time put across your point in a convincing manner. Furthermore, the best speaker is the best listener. Listen to others’ opinions with a mind to understand them, rather than to beat them. Your discussion is a puzzle, and every person has a piece that fits.

To excel at absolutely anything, you only need to practice. Even for a soft skill like group discussions, the case is no different. Invite your friends for ‘popcorn and discussions,’ where you discuss current affairs with a heavy dose of food or start talking about the impact of various government schemes instead of sharing your neighbor’s gossip. As Peggy Klaus said, “soft skills get little respect, but will make or break your career.” Master the art of group discussions, and you will not only make your career but also enhance your life.

Most importantly, remember to have fun. Don’t be nervous, and if you have a valid point, state it without fear of judgment. If you can’t get rid of the blues, think of it as your dinner table, where you’re simply having a conversation.