Hi, readers, we all are aware of the common blood groups: A, B, O, and AB. This article will enlighten you about the rare blood group, rarer than the rare, the H/h blood group. The h/h blood group also known as O/h or the Bombay blood group. It was first discovered in Bombay, by Dr. Y.M. Bhende in the year 1952.

The incidence of Bombay phenotype varies from region to region. In Indian, every 1 person among 10000 people is owning this phenotype. In Europe, it is much rare, with 1 in a million people.

Bombay phenotype can be simply defined as the deficiency of H antigen. 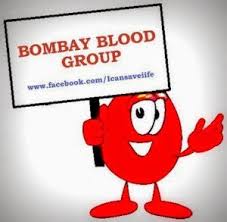 HOW IT WAS DISCOVERED

In a general hospital of Mumbai, a question was raised: Who is the father of MONICA? Monica owned a blood group of O. Her mother had blood group AO. According to ABO system, the father of Monica should owe either AO, BO or OO i.e., A, B or O because O alleles need to be passed on to Monica from her father. But her father was AB type.

However, it was found that AB type is the father of the girl. On further investigation it was known that Monica and her father are suffering from H deficiency (H/h) or have incomplete H. since her father Alan had deficient gene H, by inheriting the A or B alleles, the deficient gene also got transferred to Monica. BIOCHEMISTRY OF THE PHENOTYPE

Getting deeper into the biochemistry, there are 2 regions that code for enzymes related to substrate specificities: FUT1 and FUT2. FUT1 is the contained in H locus whereas FUT2 is contained in Se locus. For the H antigen to be presented on RBCs at least one functional copy of FUT1 need to be there (H/H OR H/h). In absence of any functional copy (h/h), Bombay phenotype results.

This phenotype results due to the Tyr316Ter mutation in the coding region of FUT1. This mutation leads to the introduction of a STOP codon by truncating the enzyme at the C-terminal end. Due to lack of 50 amino acids, the enzyme remains inactive. PROBLEM FOUND WITH THIS BLOOD GROUP

It was found that this blood group showed a reaction with other blood groups which was neither seen nor expected.

Apart from being an intermediate substrate in the synthesis of other blood types, the function of H antigen is still in question. Hence people lacking this antigen doesn’t suffer from any deleterious effects.

People with H-phenotype have a problem only at the time of blood transfusion. They can only receive blood from donors that are H-deficient. A transfusion from universal donor “O” can trigger a severe transfusion reaction.  It is known as acute hemolytic transfusion reaction. This is because O blood group contains the H antigen (H/H or H/h) which reacts with h/h of this blood type.

Secondly, it is suspected that mother having Bombay phenotype with a normal phenotype fetus ( the fetus doesn’t suffer from Bombay phenotype). Maternal blood can produce anti- H on coming in contact with fetus’s on- Bombay phenotypic blood. This could lead to Hemolytic disease of the newborn.

Since all other phenotypes have originated from H antigen, people with Bombay phenotype can donate blood to all members of ABO system. But the irony is that they can’t receive blood from them.

So, now we can say that h-phenotype is the universal donor rather than O blood type.