The question arises that what a system is-

A system is a method of working which gives output according to the input.If the input changes the output also changes accordingly. Hence it can be said that rule of doing work is fixed by the programmer.

For example, if we take the example of the car then it follows set of rules like when it accelerate or gear up then all the wheels move forward and when the handle is rotated the car moves right or left accordingly.

PROCESSOR IN THE SYSTEM

For an embedded system designer, knowledge of microprocessors and microcontrollers a basic and very important need. We can say that processor is the heart of the Embedded system.We can not imagine about Embedded system without the processor.Nowadays we have many advanced processors in the market like INTEL 80186, INTEL 80188, INTEL 80286 and INTEL 80386.

The advantage of using these is that if we talk about  INTEL 80386 it can address up to 4-gigabyte of memory and it also has the feature of multiuser and multitasking.Nowadays research is also going on the microprocessors that how can we increase the capability of the microprocessors. Nowadays we have very much data so we are thinking that after some days we cannot afford this amount of data so research is also going on that if we store our data on the DNA.It is assumed that even a single gram of DNA can store 700 terabytes of memory.

In the context of  an embedded system it is divided that these type of system can be operated in one of the following four operation ranges according to the need:

An essential need of processor is that it should have interrupt handler because we have different processes at the same time to execute so we can execute the according to their priority.

The processor’s current program is stopped if a higher priority interrupt comes then it has to divert to a service routine to complete that task on the occurrence of the interrupt.The best example to understand it is that If a sequence of keys is pressed, for instance in a mobile phone, then an ISR reads the keys and also calls a task to dial the mobile number. 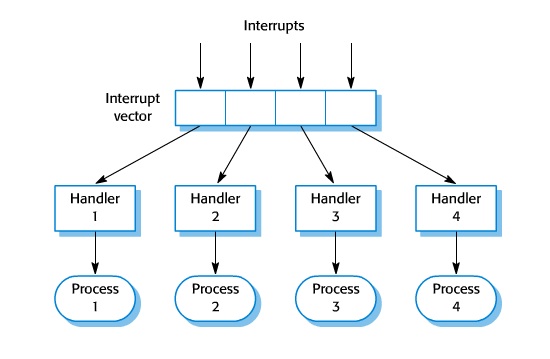